Ford Says Mustang Mach-E Will Be First to Get Its...

Our car experts choose every product we feature. We may earn money from the links on this page.

The Co-Pilot360 driver-assist feature will be available on 100,000 miles of highways in the U.S. and Canada and will roll out to other Fords beginning in 2021. 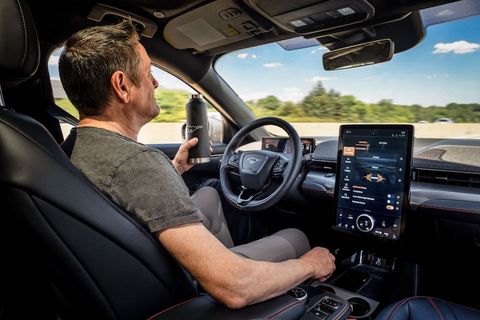 As driver-assist systems have progressed in recent years, the ability to go hands-free—albeit in select environments—has become a telling marker of how advanced any system is. Ford announced that in the coming year, it will add itself to the list of automakers claiming hands-free systems with the advancement of its Co-Pilot360 technology.

There are also improvements in the package to the vehicle’s adaptive cruise control to include lane centering and the ability to stay engaged in stop-and-go traffic. Co-Pilot360 will also have a driver-facing camera that tracks the eyes and head position of the driver ensuring they are paying attention while hands-free or are using the hands-on lane-centering system. In March, the Insurance Institute for Highway Safety (IIHS) issued a recommendation that the advanced driver-assist systems with hands-free capability should monitor drivers to require them to pay attention.

Other features in the updated Co-Pilot360 system include active park assist, which allows the vehicle to park itself and navigate in both perpendicular and parallel spots. Road edge detection, which can alert drivers when they are veering onto a gravel or dirt shoulder, and blind-spot assist, which can prevent merging into a vehicle in the blind spot, are also features on the new system that will be standard on the Mach-E and come later on other vehicles.

The system as described is in direct competition with Cadillac’s Super Cruise, a hands-free system first unveiled in 2017 on the CT6. General Motors announced earlier this year that the 2021 Cadillac CT4, CT5, and Escalade will also feature the system, which now includes automated lane changing. Super Cruise is capable of functioning on 200,000 miles of road in the U.S. and Canada.

This past February, Lexus president Koji Sato said that the luxury automaker is going to launch a hands-free driving system on one of its vehicles later this year.

This content is created and maintained by a third party, and imported onto this page to help users provide their email addresses. You may be able to find more information about this and similar content at piano.io

This commenting section is created and maintained by a third party, and imported onto this page. You may be able to find more information on their web site.